Presentation of the School

As part of the reform of higher education, a programme to set up preparatory schools in science and technology throughout the country was initiated in January 2009 by the Ministry of Higher Education and Scientific Research. One of these preparatory schools in Algerian science and technology has been planned in Tlemcen. It was created by decree N° 09-249 of August 10, 2009.

Like the other preparatory schools in the country, the Tlemcen preparatory school has the task of providing its students with high-level training in scientific and technical disciplines in order to prepare them for the entrance exams to the grandes écoles d’ingénieurs.

The courses are given in the form of theoretical courses, tutorials and practical work, the preparatory school courses last two years: they last at least thirty (30) weeks in the first year and twenty-six (26) weeks in the second year. These courses are supported by a consortium of national and international grandes écoles. Students will be able to follow distance learning courses (videoconferences).

PERSPECTIVES AFTER THE PREPARATORY TRAINING

After passing the competition at the end of the second year of study, the engineering student will follow a three-year specialisation course at a major engineering school.

The national grandes écoles where students from preparatory schools in science and technology can continue their studies after successful completion of the competition are:

PROMOTION OF THE PREPARATORY SCHOOL IN HIGHER EDUCATION

In accordance with the provisions of Executive Decree 17-82 of 15 February 2017 published in the Official Gazette No. 12 of 22 February 2017, the Preparatory School of Science and Technology in Tlemcen has been promoted to the Higher School of Applied Sciences ESSA TLEMCEN.

The School of Applied Sciences of Tlemcen is located in Bel-Horizon, a quiet and pleasant place. It enjoys an exceptional setting and offers a serene atmosphere conducive to successful study.

ESSA Tlemcen has opened for the year 2016-2017 after two years in preparatory classes, a three-year engineering and master’s degree course in Electrical Engineering with the “Energy and Environment” option.

For the academic year 2017-2018. ESSAT offers two new specialities in Automation and Industrial Engineering with the option of “Industrial Management and Logistics”.

The curriculum is in two stages:

ESSA Tlemcen has the following infrastructures: 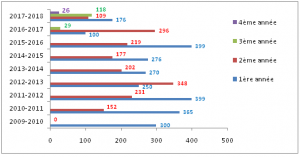 2.Success rate in the national entrance exam for the Grandes Ecoles

3.Evolution of the number of teachers 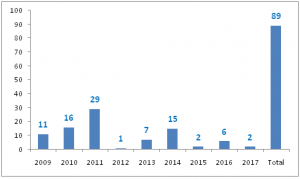 4.Evolution of the ATS workforce 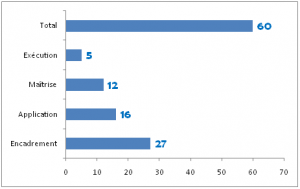